Did you ever buy a polish that you couldn’t really tell in the bottle what it would look like on the nail, but you were sure it would be cool?  Then you tried it and it didn’t rock your world like you thought it would.  I’ve definitely done this a lot of times.   One thing I have discovered is that a lot of these types of polishes take on a whole new life when you put them over black polish.

Let’s look at each of these starting with… 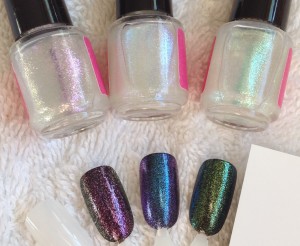 These polishes are from Valley Girl Lacquer, and indie polish company.  Here’s the link to their etsy shop.  The polishes from left to right are Profundity, Enigma, and Conundrum. These were actually a gift from my little sis.  When I got them, I thought they pretty much looked the same in the bottle.  My sis assured me that according to the pictures online, they would look awesome over black. And do they ever!  They are all duo-chrome-ish to some degree.  Enigma has the strongest 2-color appearance, as it reflects a really strong purple from some angles.

The middle chunk of polishes I have for you is a little less exciting. 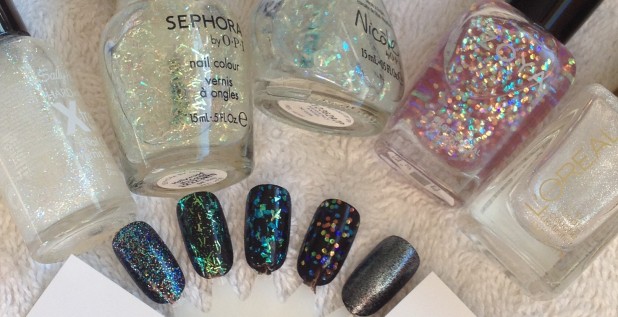 From left to right: Sally Hansen – Disco Ball, Sephora by OPI – Hollywood if I Could, Nicole by OPI – Heavenly Angel, Zoya – Monet, Loreal –  The True Daimond.

None of these are really earth-shattering.  I guess the thing I want to point out is that all of these colors give a nice mellow sparkle to any lighter color, but when you put them over black, it’s like POW!

Here are the next two:

They are Orly – Sky Blue-Pink and Sally Hansen Lustre Shine – Moonstone.  Yeah, I don’t know why it’s called Sky Blue-Pink either, because it definitely gives off a copper color.  When either of these are worn on their own, they really just look like a pearly nude polish.  Nice, but super subtle.  One coat over black gives a totally different look!  As I said, the Orly polish gives a really strong copper color, and Moonstone turns into a really cool pink-purple-blue-green multi-chrome.

My last one is the most amazing:

This is Fresh Paint – Sugar Crush.  This is what’s generally called a flaky topper.  (I hate that name, but if that’s what everyone else wants to call these polishes, I guess it’s not in my power to change it. )  Flaky polishes can sort of look like glitter toppers at first glance, but they are just different, and you can tell when you apply them.  Flaky Polishes are packed with tiny duo-chrome little bits that apply really nicely and evenly to the nail.  They can seem a little like a holographic shredded glitter polish like Nicole by OPI – Heavenly Angel, but the application is really different.  A shredded glitter topper behaves like any other chunky glitter topper: it’s a little hard to apply and can take some dabbing and finagling to get even application.  Flaky polishes apply much more easily.

When I first got this, I swatched it over a neon coral, white, and black: 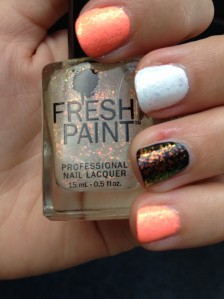 (These are actually my sister’s fingers.)  As you can see, over the lighter colors, the effect is pleasant, but not amazing.  I still remember when we were doing the swatches and I painted this polish over the black, both my sister and I were like, “Whoa!”   Ever since I got this polish, I’ve been waiting for October to roll around so I could wear it over black.

Okay folks, that’s it for today.  Thanks for reading, commenting, and liking.  It means a lot!