I’ve turned two more of my “untrieds” into “trieds”.  I know, those aren’t even words. 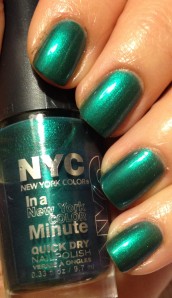 This polish is pretty sheer, so it took either 3 or 4 coats to get it opaque like this, but it’s so pretty!  The color is just so rich!  Sometimes I felt like my nails were an emerald-y Christmas green, and other times I felt they looked more turquoise.  Such a good color for the cooler months!  My hubby even liked it, and as a rule, he hates anything that has to do with peacocks.

I’m sure you are all dying to know why my hubby, Mike hates peacocks, right?  Okay, I’ll tell you.  The first apartment we lived in after we were married was out in the country in redneck territory.  One particular redneck owned a peacock that he just let roam around the country side.  I don’t even know if that’s legal.  Anyway, the peacock, who our little-old-lady-landlord called “George” liked to sit in the tree right outside our bedroom window.  Well, every morning from April to August, George would sit in that tree at do his mating call, starting at about 4:00am.  Here’s a youtube clip of what it sounds like.  I’m a pretty sound sleeper, but Mike is not.  He assaulted George with tennis balls, golf balls, rocks, a super soaker,….  George would just hop to a branch that was out of Mike’s reach.  George would not be deterred.  Anyway, we moved from that apartment after about 3 year when we bought our home.  After we moved, we heard that George was hit by a car.  We were not sad.

Back to nail polish.  I played with my gum wrapper in church and came up with this: 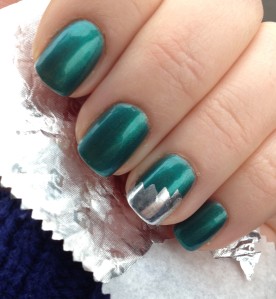 Did you know that you can actually peel the foil off of the paper part of the wrapper?  It takes a little bit of work, but then you are left with a really thin foil layer that has a little adhesive on the back. 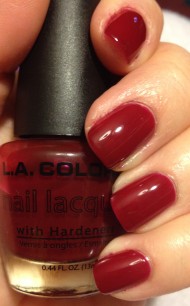 This is a jelly formula.  This is four coats and you can still see my nail line a little bit, and the color is still not as rich as it is in the bottle.  It is nice and shiny and I’ve actually gotten multiple compliments on this one.  I think I’ll have to do some jelly sandwiching with this one in the future.

You may or may not be wondering why I have not been posting as much lately.   Well, I’ll tell you.  It’s crocheting season for me.  I mostly make hats.  I do a handful of craft fairs this time of year, and I’ve been working to bulk up my inventory a little bit.  Here’s one that I jut finished yesterday: 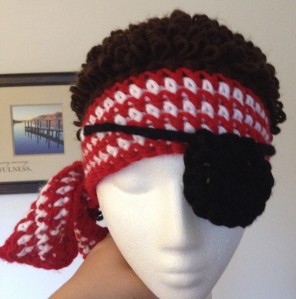 The “hair” is a whole bunch of loops like a Cabbage Patch Kid!  And the eye patch is removable/adjustable.

I actually have a little etsy shop, but I don’t have any items listed for sale now since I’m offering them at craft fairs.  I’ll let you know when I have some items back up for sale in my shop, just in case any of you are interested.